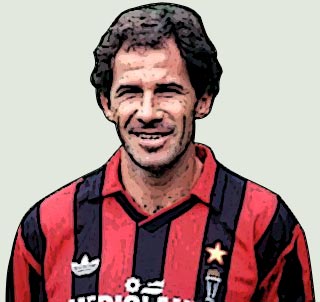 This top 10 list of footballers is a selection of players from all era. It is not surprising to see many Italian players in this list. Italy is renowned for its defense, being home to catenaccio style football.

Daniel Passarella was a reliable defensive force but what makes him unique among history’s greatest defenders is his scoring ability. He was a dangerous man off set pieces and was remarkable for his ability to score from corners with a header even if he stands at only 5’8”.

Passarella sealed his place in the hall of greatness during the 1978 World Cup when he captained Argentina to the championship. He replicated this feat by winning the 1986 World Cup for Argentina.

In the 70 games he played for the Argentine football team, he scored a total of 22 goals, quite remarkable for a player committed to defense.

Fachetti’s knack for scoring remained even though he was positioned on the defensive back. He was the one who revolutionized the position of a football defender into someone who can score and help teammates score.

Facchetti was an integral part of the “Grande Inter,” the finest squad the Internazionale Milano had. With Inter, he won four  Italian Serie A championships, two European Cups (1964, 1965), and two Intercontinental Cups (1964, 1965).

He also helped Italy win the 1968 European Football Championship and in its runner-up campaign in the 1970 World Cup.

Ruud Krol is an extremely versatile player, which made him a perfect proponent of the Dutch total soccer system. He is highly regarded for his speed, which he retained over his long player career.

When not defending, Krol would lead his team’s attack or make long passes which always find their way to the intended player. His passing skills greatly enhanced Johan Cruyff’s offense.

Rudi also proved several times that he can score. One of his most notable goals was against Argentina in the 1974 World Cup, which he scored from 25 yards away.

Krol is a member of the unlucky Netherlands football team which made it to the 1974 and 1978 World Cup finals but never won the championship. He is remembered by Dutch fans for his reliability and versatility, which he showed in the 83 caps he has for their national team.

Djalma Santos was the starting defender of the Brazilian powerhouse of 1950s and 1960s. Although he mostly started as right-back, Santos can switch to different soccer positions and was often seen playing up the field.

Santos played his first of four World Cups in 1954 where he showed his consistency and solidity by playing in all games of the tournament.

His second, the 1958 World Cup, was the best for him despite being the briefest. He played only one game, which is the final against Sweden, yet his performance was so outstanding that he was included in the All-Star Team that year.

The 1962 FIFA World Cup saw another stellar performance from Santos. He played in every game in that tournament and dished an unforgettable assist to Vava in the final against Czechoslovakia.

The 1966 World Cup would be the last for Santos. It was an unexpected selection because he was already 37 years old that time and a younger Carlos Alberto provided another option for the right back position.

Djalma Santos is one of only two player who became a member of the FIFA World Cup All Star team three times (1954, 1958, & 1962). His counterpart is no less than the German legend Franz Beckenbauer. Until today, he is widely considered as the best wing back ever to play the game.

While Pele led the Brazilian attack during its glory days, Carlos Alberto was the one who manned its back. Carlos Alberto became famous at a young age because of his excellent ability to read opponents, a skill he complemented with his flawless tackling.

Carlos Alberto was more than a defender. He was also a solid playmaker, a feat he was able to do because of his excellent passing and dribbling skills (How to dribble a soccer ball). During his professional careers in Brazil and later on the United States, he became instrumental in the championships of whatever club he was in.

Carlos Alberto claimed his greatest game in the 1970 World Cup (Football world cup 1970) final, with a goal against Italy. He scored it by cutting to the edge of the penalty box and kicking the ball with so much power that it left the keeper with no chance. It would become one of the greatest goals of all time.

Gaetano Scirea spent most of his club career with Juventus where he played as a libero. Being in that position placed him as the last line of defense before the goalkeeper, a role which he fulfilled with unparalleled brilliance.

Scirea was remarkable for his ability to read the opponents’ offence, break up their plays, and retrieve the ball for his team. Yet he was more than a defensive libero. He also orchestrated plays and even scored goals himself.

Gaetano Scirea was a gentleman on and off the pitch. He defended solidly but cleanly, and was never booked in his professional career. Scirea was humble despite his brilliance, making him well-loved among the Juve fans.

Scirea was in the Italian football team for nearly 12 years, with which he won a World Cup title in 1982. He teamed up with Claudio Gentile to become one of the pillars of Italy’s defence.

Although he passed away at the young age of 36, Scirea gathered enough titles to become a legend. Among his championships were seven Serie A titles, UEFA Cup (1977), UEFA Cup Winner’s Cup (1984), European Cup (1985), and Intercontinental Cup (1985).

Baresi is endeared to AC Milan fans for staying with the club through its best and worst times. But what makes him admired by football fans is his defensive ability. Any attacker who comes close to the penalty area that Baresi guards is bound to end up getting tackled or ripped of the ball.

Despite playing sweeper, Baresi did not hesitate to go up when there is a chance to attack. This is quite unusual since running the whole length of the field is a task for wingbacks.

Baresi is also remembered for being the mentor of Paolo Maldini. As testament to his greatness, the AC Milan club retired his football jersey number, a very rare practice in Italy. No player of AC Milan will ever wear the number 6 jersey after Baresi.

By the time his career ended, Baresi has gathered at total of 14 major championships: 6 Serie A titles, 3 European Super Cups, 3 European Cups, and 2 Intercontinental Cups.

Unknown to many, Baresi has a World Cup title which he won in 1982. But he was not given a single minute in the tournament for reasons known only to his coach Enzo Bearzot.

Bobby Moore was hailed by Pele as the greatest defender he has ever faced. He never gave up on a ball and he times his tackles immaculately. Despite his physicality, Moore played fairly and clean, which earned him the respect of other players.

One of Moore’s greatest moments came in the 1970 World Cup. Jairinzho, a legendary Brazilian winger, was rushing towards England’s goal and was about to score inside the penalty area when Moore tackled the ball away from him.

Despite his brilliance, Bobby Moore’s career is highlighted only by two major championships. One is the 1965 UEFA Cup Winner’s Cup which he won with West Ham United. The other is no less than the World Cup in 1966, which he won as England’s Captain.

Bobby Moore became an enduring icon of World Cup victory from then on, with the famous photo of him lifting the Jules Rimet trophy as he was held high by teammates.

With 26 championships across his name and owning the most number of caps for Italy, Paolo Maldini is practically unequalled both as a player and a defender. But he earned his place in football greatness for far greater reasons than the championships could tell.

Maldini is, quite simply, the best defender of his time. He was quick and strong, able to stick to his man and tackle down any opponent who challenges his defense. He also has exceptional endurance, able to run up and down the whole field length throughout the game.

Maldini owned the left flank of the field, not only in defense, but also in offense as well. He makes excellent crosses and could finish if necessary. He also has an excellent leadership skill, which he utilized best as center back.

Because of his ability to control the game, he is nicknamed “Il Capitano,” a nickname made more appropriate by the fact that he captained the Italian national team and AC Milan.

Franz Beckenbauer was notable for his game-turning goals but amazingly, he played as a sweeper. His success was a result both of his skills and his brilliance in modifying the roles of a defender.

Before Beckenbauer came into the spotlight, the role of the sweeper or libero was purely defensive. But he saw the possibility of utilizing his position in order to lead his team’s attack and would at times finish the attack he started.

Franz Beckenbauer’s skills are equaled by his successes. He won the European Cup thrice, UEFA Cup Winner’s Cup, and the Intercontinental Cup. He also played a great part when Germany proved itself to be the best in Europe by winning the 1972 UEFA European Football Championship.

On top of those major championships is the 1974 FIFA World Cup title, which was made more memorable for Beckenbauer since he won it as a team captain.

Beckenbauer’s brilliance was twice confirmed by the Ballon d’Or, the highest individual award in Europe. It is very rare for a defender to win that award and winning it in 1972 and 1976 only shows that Beckenbauer is the best defenseman ever.